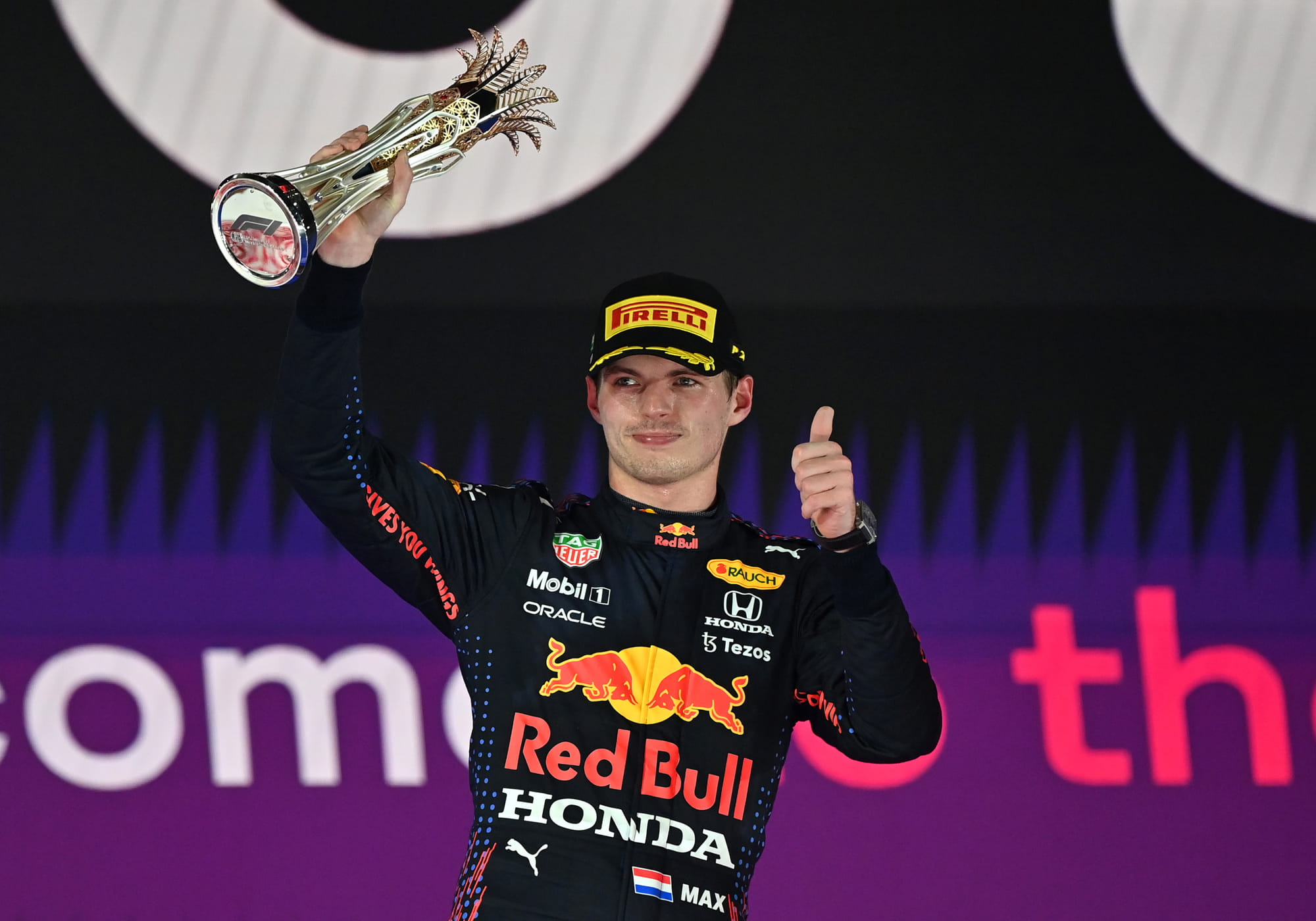 A dramatic first race in Jeddah leaves the drivers’ title neck-and-neck heading into the final round while Red Bull Racing is still fighting in the constructors’ battle.

After a strong qualifying for all four Honda-powered cars, hopes were high for the race and Max maintained his third position at the start with Sergio also staying fifth off the line. However, both AlphaTauri drivers lost ground, with Pierre slipping from sixth to eighth, and Yuki being demoted to 12th after light contact with Esteban Ocon.

A Safety Car on lap 10 opened the opportunity to make a pit stop, with Red Bull calling Sergio in but leaving Max out to take the lead from the two Mercedes drivers. It proved to be a sublime piece of forward-thinking as the race was soon red-flagged to allow barrier repairs, meaning Max could change his tyres for a new set of hards and retain the lead for a standing restart.

The restart saw Max lining up on pole with Pierre in seventh, Sergio eighth and Yuki 11th, with all four on the hard compound and able to run to the end.

Unfortunately, while Max fought to retain the lead off the line, Sergio was caught in the middle of Charles Leclerc on his left and Pierre on his right through Turn 3, with contact with the Ferrari pitching him into the barrier and taking him out of the race.

That crash caused another red flag, and the stewards informed Max he had to drop two places as a result of cutting Turn 2 on the original start, meaning he would line-up in third place for the next restart on lap 17. Pierre was sixth as the race restarted for a third time and still on hard tyres, with Yuki 12th and on the same mediums as Max.

Max used those tyres to great effect to take the lead into Turn 1 on the restart, while Pierre retained sixth and Yuki made an impressive restart to climb into ninth place. Unfortunately that’s as good as Yuki’s race would get as he was caught in an incident with Sebastian Vettel, damaging his front wing and earning a five-second time penalty that would limit him to 14th at the finish.

As the race continued, Max was embroiled in a thrilling fight with Lewis Hamilton, trying to keep his title rival at bay as the pair went wheel-to-wheel. On one occasion, both drivers went wide at Turn 1 while battling for position but Max was ordered to give up the lead, having been deemed to have left the track and gained an advantage.

In trying to give up the position, Max was then hit from behind by Hamilton, and was then harshly given a five-second time penalty for the original incident, despite later allowing the Mercedes to pass him.

Once second on the road on old medium tyres, Max safely brought the car home in second place for a result that leaves him tied with Hamilton heading into the final round of the season in Abu Dhabi next week.

Away from the chaos, Pierre drove a strong race and showed good pace throughout, closing down Daniel Ricciardo in the closing stages but having to settle for sixth place and another eight points that moves him beyond the 100-point mark for the first time in his career.

Both championships are still in play heading to the Yas Marina Circuit, with Max ahead due to the number of races he has won this season, and Red Bull needing to overturn a 28-point deficit to become constructors’ champions

The first Saudi Arabian Grand Prix turned out to be a very chaotic race, which had to be red flagged twice. For Red Bull Racing Honda, Max who maintained third place at the first start, got the benefit of the first stoppage in terms of pit stop strategy and was able to lead for a while. However, in the end, he had to settle for second place, which is not ideal in terms of the Drivers’ title. As for his team-mate, Checo suffered an unfortunate collision which meant he retired just after the first restart. For Scuderia AlphaTauri Honda, Pierre did a good job of managing a complicated race to finish where he started in sixth place. After a slow start, Yuki was up in the points until his collision with Vettel, eventually finishing 14th, but for a rookie at a difficult track like this, his pace had been good all weekend. In terms of the Drivers’ championship, Max and Lewis are now equal on points, while Mercedes has extended its lead in the Constructors.’ It means both titles will be decided at the final race in Abu Dhabi next Sunday, which will also be Honda’s last Formula 1 race. However, we will not change our approach and simply concentrate on having the best race possible with our two teams and all four drivers.

There was definitely a lot of action today, a lot of things happened. I was told to give the position back, so I moved off the racing line and slowed down, Lewis just stayed behind me, I don’t understand why he didn’t pass. I don’t agree with the five-second penalty, but it is what it is and we’ll just move on. We didn’t have perfect pace in the race today, so that’s something to work on looking ahead to Abu Dhabi. We’re on equal points now heading into the final race, it’s going to be an exciting end to the season.

I’m very pleased with today, finishing in the top six in front of Ferrari, I’m really happy with that result and we’re taking home a lot of points again. We knew it was going to be tricky coming to a new track, but we’ve performed well throughout the weekend and had a strong starting position today. It was a difficult race, with lots of things happening and it was very long, which meant it required a lot of focus. We know how complicated it is into the first corner here, so having three starts was intense, but we tried to take every opportunity we could and in the end I think we did a good job.

It’s been a tough afternoon. I struggled at the beginning of the race, but I think the final restart went well and I managed to gain back some places. Unfortunately, I pushed a bit too hard and I had the collision with Vettel. The pace in the car was looking quite good at that point in the race, so I should’ve held off and waited for another opportunity to overtake, it was my mistake and I’ve apologised to him. It’s frustrating as I feel like points were on offer today.

It wasn’t the best weekend for the Team, we lost crucial points in the Constructors’ Championship, so we are going to Abu Dhabi now to try and turn things around. We were slightly unlucky with the first red flag but we got away well after the second restart. We got past Gasly and Charles and as I was coming out of turn three there just wasn’t enough room for everyone, given how the corner was. I ended up tangling with Charles, he clipped my rear tyre with his front right tyre. It was a bad moment for everyone but just a very unlucky one. It is just a big shame because we needed those points today. I stayed with the car out on track because we were trying to turn the engine back on, we thought we could restart it but it was a bit on the hot side so we had to retire.  It was a very important race for the Team today so this one hurts a lot but there is hope for Abu Dhabi. There is still optimism and something to fight for and we will give the final race of the season everything so let’s look forward.