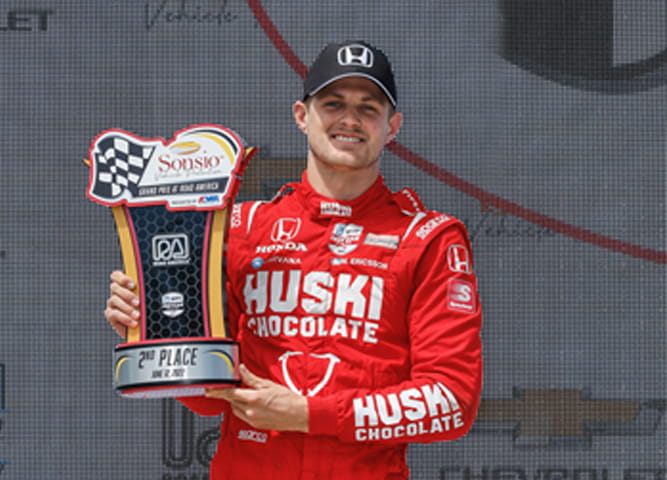 Last month’s Indianapolis 500 winner Marcus Ericsson led the way for Honda today in the NTT INDYCAR SERIES Sonsio Grand Prix of Road America, with a second-place finish vaulting him back into the championship points lead after eight of 17 races.

Starting fourth, Ericsson ran in the lead group throughout the first two stints of the 55-lap, 220- mile race. When a late-race caution flag led to a restart with just three laps remaining, second- running Alexander Rossi made a lunge for the lead, but had to abort the attempt and Ericsson used the opportunity to grab second, finishing three seconds behind winner Josef Newgarden. With today’s result, Ericsson has a 27-point lead in the NTT INDYCAR SERIES Drivers’ Championship over Will Power, who finished 19th.

Also of note, Graham Rahal rebounded from a disappointing 22nd in qualifying to finish eighth today, with his Rahal Letterman Lanigan teammate Christian Lundegaard leading the rookie contingent with an 11th-place finish.

Marcus Ericsson (#8 Chip Ganassi Racing Honda) finished second, moves into the Drivers’ Championship points lead after 8 of 17 races: “It was a really good race, and we were strong throughout the weekend. Honda, HPD, and everyone on the #8 Chip Ganassi Racing team did an awesome job this weekend, they gave me a really good race car today. Finishing second is great for the championship. I am sorry about the [early race] contact with Alex [Palou]. From my point of view, we were side-by-side and it was a nice racing move. But you never want to have contact with a teammate, and I’m super sorry Alex was damaged there.”

Alexander Rossi (#27 Andretti Autosport Honda) pole qualifier, finished third: “We went for the lead on that last restart, and it kind of cost us [dropping from second to third], but ultimately a good day for us. It took us until the last stint to get the balance right in the car, and then we could make up ground on Josef [Newgarden]. It’s always disappointing when you start on pole, but don’t win the race, but it’s been a good couple of races for us [with podium finishes at both Detroit and Road Amerca]. We’ll take to positives from that and move on to Mid-Ohio.”

Rebecca Johnson (Senior Manager, Director of Production, Honda Performance Development) on today’s Honda podium finishes at Road America: “While we can’t be fully satisfied with missing out on the race win, it was good to seen Marcus [Ericsson] move back to the championship points lead with a strong second-place finish and Andretti Autosport had their best result – across the board – today with [Alexander] Rossi, Romain [Grosjean] and Colton [Herta] all scoring top-five finishes. The Rahal Letterman Lanigan organization today demonstrated they are improving, with Graham [Rahal] coming from 22nd on the grid to finish eighth; and Christian Lundegaard again leading the rookie field with an 11th-place result. After five consecutive weekends at Indianapolis, Detroit and now here in Wisconsin, it will be nice for the HPD race team to get a brief, but well-deserved break, before resuming the season at our “home” circuit, the Mid-Ohio Sports Car Course, on the Independence Day weekend.”