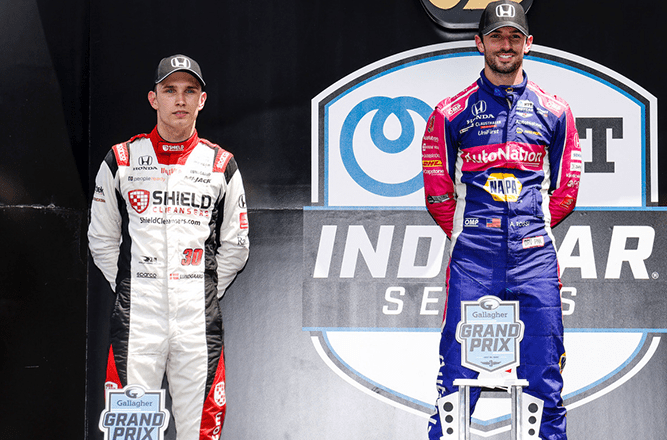 Alexander Rossi dominated the second half of today's Gallagher Grand Prix on the road course at the Indianapolis Motor Speedway, as the Andretti Autosport driver headed a 1-2 finish for Honda and completed a sweep of NTT INDYCAR SERIES races at the famed "Brickyard" in 2022.  Rossi led a race-high 44 laps in the 85-lap contest to record his first win of 2022, and his eighth career victory.

Rahal Letterman Lanigan Racing's Christian Lundgaard completed the 1-2 Honda result today, his best result in his rookie Indy car season.  Teammate Graham Rahal finish seventh in another strong outing.  Colton Herta led 17 laps, setting up a possible 1-2-3 finish for Honda, but dropped out after 42 laps with an apparent transmission/driveline issue.  Scott Dixon gained a dozen positions in the race to finish eighth, taking him to fourth in the series championship standings.

Alexander Rossi (#27 Andretti Autosport Honda) race winner: "It's been an amazing weekend, right from Practice 1, the car performance was there.  Everything we had going for us, from the balance to the Honda power and driveability, we knew we had a car to win. It was just a matter of us going out there and doing it.  I'm so thankful for the continual belief I've received from the whole Andretti Autosport organization this year, just an incredible weekend for us."

Christian Lundgaard (#30 Rahal Letterman Lanigan Honda) Finished second, best INDYCAR result in his rookie season:  "Honda one-two! It really should have been a one-two-three, but this feels amazing. It's just awesome to be up here, to be on the podium at the Indianapolis Motor Speedway! I think the team just deserves every bit of this achievement and this performance. I'm just super happy for the team. For me, as a driver, of course I'm happy with this podium, but I think the team just deserves it so much after all their hard work. I'm just incredibly pleased."

Wayne Gross (Manager of Trackside Support, Honda Performance Development) on today's Honda victory on the Indianapolis Motor Speedway road course: "Congratulations to everyone at HPD, Andretti Autosport and of course Alexander Rossi.  With Colton [Herta] and Alex, we won both Indy road course races here this year, plus the 500 with Marcus [Ericsson].  This has been a pretty special place for us this year!  Thanks to everyone involved, and let's keep pushing through the final quarter of the season."

Next
The NTT INDYCAR SERIES now heads to the temporary street circuit Big Machine Music City Grand Prix in Nashville, Tennessee, and the conclusion of a run of five races on four consecutive race weekends.