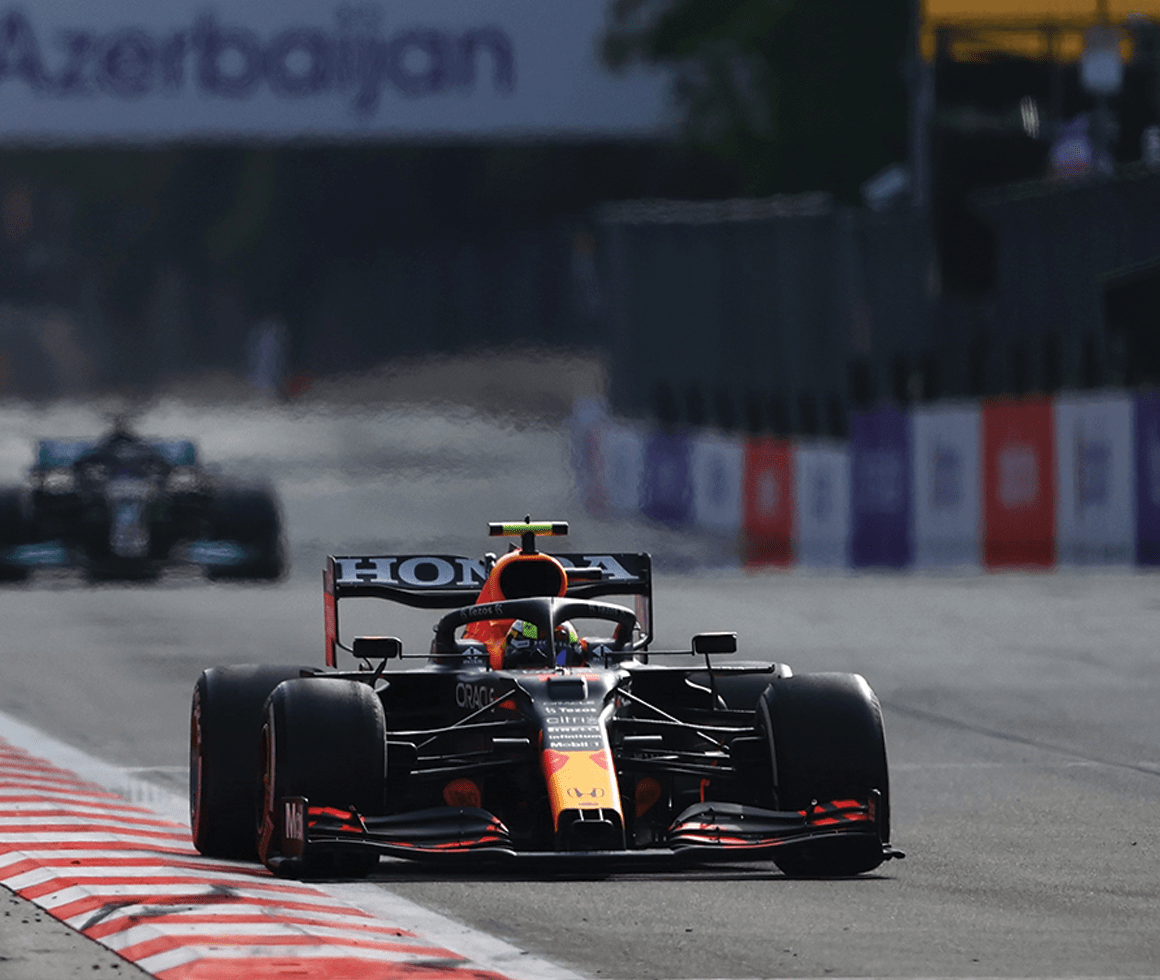 6th June, Baku: Sergio secured his first win of 2021 and Pierre picked up his first podium, with both Honda-powered teams finishing in the top three, but that doesn’t tell half the story of the Azerbaijan Grand Prix.

Max started from third on the grid alongside Pierre in fourth, with Sergio sixth and Yuki seventh after a strong qualifying performance all round. In the early stages, Max sat third before quickly clearing Charles Leclerc and setting off after Lewis Hamilton, while Sergio made a brilliant start to rise to fourth by the end of the opening lap. One lap after Max passed Leclerc, Sergio also overtook the Ferrari so Red Bull Racing were running second and third.

Pierre was a strong fifth at this point, while Yuki had lost one position at the start but regained it with a good move on Fernando Alonso, and was then the first of the Honda-powered drivers to make a pit stop as Scuderia AlphaTauri called him in on lap nine. Pierre followed suit two laps later - with both drivers switching to hard tyres - before Max also stopped on lap 12.

That strategy saw Max jump ahead of Hamilton to take the lead, while Checo also produced a number of quick laps at the end of his first stint before stopping a lap after Max. Despite a slightly slow stop, Sergio still emerged in front of Hamilton and Red Bull ran one-two for the majority of the race.

A Safety Car was needed on lap 30 after a high-speed left rear tyre failure for Lance Stroll, and although Max and Sergio could retain their positions in the lead on the restart, Pierre dropped to fifth behind Sebastian Vettel who was on newer tyres.

Entering the final five laps, disaster struck as Max - who was comfortable in the lead - suffered a left rear tyre failure on the pit straight and crashed at 200mph. Fortunately he was unhurt but the debris and concern regarding tyres in general, meant the race was red-flagged.

All drivers could change tyres and a standing restart was called with two racing laps, with Sergio restarting from pole position, Pierre fourth and Yuki seventh. All drivers restarted on soft tyres and although Hamilton tried to overtake Sergio at Turn 1, the Mercedes driver overshot the corner and Sergio was able to cut back inside to regain the lead and go on to take his first victory for Red Bull and Honda.

With Hamilton dropping back, Pierre was now third and had a thrilling fight with Leclerc for the final podium spot as he was overtaken at the end of the penultimate lap but instantly picked up the slipstream and re-passed the Ferrari into Turn 1.

Yuki crossed the line seventh after some close fights on the restart, picking up the best result of his rookie season so far. Sergio’s victory was our 81st in Formula 1 and with Pierre third it was our first double-podium since Bahrain last year. With Red Bull and AlphaTauri each picking up a trophy, it also marked the first time we’ve had two teams on the podium together since Max and Pierre in Brazil in 2019.

The result sees Red Bull extend their lead in the constructors' championship to 26 points, while AlphaTauri are now fifth in the standings after moving ahead of Aston Martin.

“As usual, the Baku circuit produced a chaotic race, but in the end Sergio Perez who had run a strong second for most of the afternoon was able to claim his second ever F1 win and his first with Red Bull Racing and Honda, after defending his lead at the restart following the red flag. Really, the win should have gone to Max Verstappen who dominated the race until a crash, for which he was entirely blameless, put him out of the race with three laps remaining. Pierre Gasly also had a good afternoon, finishing third for Scuderia AlphaTauri Honda and for us to have two drivers on the podium, one from each team, is really fantastic. Yuki Tsunoda did well to come home seventh and score points in a tough mid-field battle so that the team has moved up to fifth in the Constructors’ classification. Today’s performance and having four cars in Q3 yesterday was down to a great job from all four drivers and both teams. Now we have a short break in which to prepare for what will be a tough triple header, which starts with the French Grand Prix. We are looking forward to it and will be working hard to try and keep winning.”

“From a Honda perspective, we can be pleased with Scuderia AlphaTauri’s performance today as this circuit is very demanding for the Power Unit. The typical slow street circuit corners followed by the very long straight means that we have to consider the best combination of three factors – power, driveability and energy management and Baku is one of the most difficult circuits from that point of view. The final race result shows that we did quite well in terms of energy management and that is thanks to all the hard work and experience of staff in HRD Sakura and HRD UK.


A chaotic race like today’s is busy and demanding for the engineers. Of course, we had planned for various possible scenarios, working with the AlphaTauri engineers before the weekend and were well prepared and Pierre made the most of the opportunity to get on the podium once again. Apart from a mistake in qualifying Yuki also performed well this weekend, doing a decent job and scoring points. It was his first time in Baku and he made progress through each session. He had some tough race weekends before this one and has worked very hard to improve. Scuderia AlphaTauri Honda is now fifth in the Constructors’ championship but it is very close and there is still a long way to go. We have a good chassis and our PU is also performing well, so if we can keep having decent race weekends the results will follow, hopefully producing more podium finishes for Scuderia AlphaTauri Honda.”

“We love Baku! It feels amazing to get my first win with Red Bull. The Team did a tremendous job and I want to thank Mr Mateschitz for this great opportunity and giving me the seat. I feel very sorry for Max because he deserved the win and a 1-2 for the Team would’ve been very enjoyable. It was a crazy rollercoaster of a race, we were basically flat out from the very first lap and I had Lewis behind pushing me so I couldn’t breathe, it was very challenging but we kept our focus. Everything worked perfectly today apart from the restart at the end where I just had no grip. I thought I cannot lose this race two laps from the flag so I broke as late as I could into Turn 1 and then I saw Lewis locking up and go straight on into the run off. It just shows how on the limit we are, the speeds we are doing are tremendous and I am sorry for Lewis because it’s very painful when these things happen but we are all vulnerable to mistakes. We have to enjoy today, our pace was great and we have a very good race car. We are working flat out and giving our best every week, it’s only race six and there’s more to come from me, the relationship with Max and the Team is great and there’s still a long way to go in this championship. ”

“What an incredible weekend, topping FP3, then P4 in Qualifying and now a podium today – I’m so happy for the guys, it was a great result! What a way to do it as well, the last two laps were so intense with Charles and I really had to fight hard to get that podium. The entire race was really full-on, we managed to keep up with the guys ahead but from the middle of the race we had an engine issue and we started to lose some power in the straight, so I knew it was going to be hard until the end, but we managed to hold on to P4. After the restart I thought that Charles would pass me on the straight because we had lost performance, but I saw the podium ahead of me and I tried everything, I just wanted it so badly. It was hard but fair racing, just as we like it. The car was incredible all weekend, it felt really good, and it’s just a fantastic result for the whole team. I’m really pleased to reward them with a podium. Moving forward to France, we need to analyse what went well this weekend and see how we can use these learnings at the next race. It’s my home race so I really want to do well there but for now it’s time to celebrate – I’ve already had a Red Bull, but I think we’ll be having something else tonight too!”

“I’m a bit frustrated by the final result today, as I think the pace in the car has been strong this weekend. The start of the race was ok for me and until the red flag I think my performance was really good. Unfortunately, I dropped two positions during the last laps, I’m not sure I could have done anything differently but I’ll analyse everything tonight so I can understand this better moving forward. P7 still means important points for the team though. I want to say congratulations to Pierre for the podium today, the team really deserve it and it’s a great result.”

“To retire from the lead of the race so close to the finish is pretty frustrating. I didn’t feel anything strange with the car and then suddenly the left rear went and I was in the wall quite hard. It’s not a nice place to crash and we don’t know the exact cause yet, I’m sure it will be fully investigated. Up until that point it was a great day, the car felt perfect and I was comfortable in the lead so it felt like it would be an easy 1-2 but there are no guarantees in this sport. Of course I am frustrated from my side not to win but I was very happy to see Checo up there. He did everything that the Team could have wanted today. He had a great start and then we both got past Lewis in the pits. I heard he had to defend for most of the race, so if I couldn’t win, I’m glad he could. He’s a great guy and a great teammate so it was good to see him smiling on the podium and having his first win for Red Bull. It’s a shame that we missed out on the opportunity to make the gap bigger to Lewis today in the championship as we know when we get back to the normal tracks Mercedes will be very strong again but it just goes to show anything can happen and it’s still a good result for the Team! ”