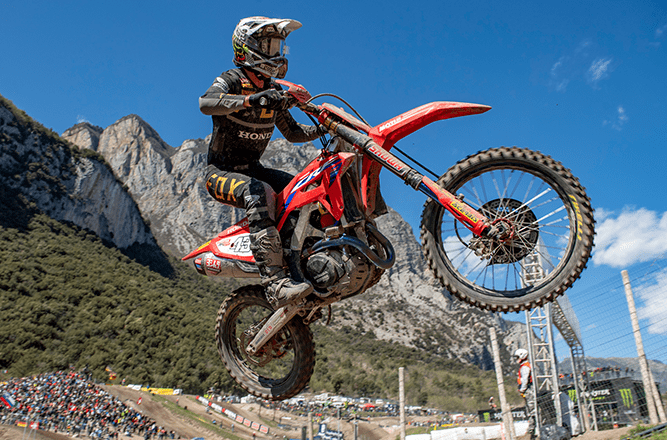 The northern Italian province of Trentino hosted round five of the FIM World Motocross Championship today. Nestled at the base of the imposing Dolomite mountains, as always the stunning Ciclamino circuit produced some exciting racing and a tough challenge for both riders and machines.

In the MXGP class it was no surprise that Team HRC’s Tim Gajser once again showed great form with a Champion’s performance in both races. Great also to see Gajser’s teammate Mitch Evans showing positive signs of a return to form following a bad wrist injury in 2020 forcing him out of the entire 2021 season. Evans rode his CRF450R to third place in Saturday’s Qualifying Race, but struggled to find the same form on race-day, yet still delivered a much improved performance on this demanding circuit.

In race one, Gajser took his time and circulated in second place for half of the moto, riding calmly and smoothly. By the half way point it was go-time for Tim as he took over the lead and easily pulled away to win the race comfortably by over 3.5 seconds.

Mitch Evans and Honda 114 Motorsports’ Rubén Fernández finished the race in 10th and 11th positions; Evans on a comeback to full-fitness and Fernández nursing a thumb injury sustained at the last round in Portugal.

In MXGP Race two Gajser took over the lead on the first lap and won the race by over five seconds. Fernández had a better start in the second moto and battled hard to the end, eventually finishing the race in eighth to give the Spaniard eighth overall. Evans finished the race in ninth place after a poor start and battling back from 13th on lap one. The hardworking Australian finished the day in ninth overall, one point behind Fernández.

Gajser and Team HRC now lead the illustrious MXGP championship by 33 points and the next race will take place in Latvia on 24th April.

In the ever-competitive MX2 class the best showing Honda was once-again frenchman Stephen Rubini who struggled a little to deliver an effective start, giving himself a lot of work to do in the races.

Race one and Rubini rounded lap one in 13th place but battled hard throughout the moto to squeeze his way into ninth place at the finish.

Recovering from a hard crash in Portugal last weekend, Honda 114 Motorsports’ Norwegian rider Hakon Fredriksen had a tough ride in moto one, starting in 20th and finishing the race in the same position after briefly moving up to 16th on lap two.

MX2 race two and once again Rubini and Fredriksen with gave themselves some work to do - Rubini hitting lap one in ninth with Fredriksen down in 22nd. Rubini dropped to 11th in the early stages of the race, but made his way back to ninth at the finish to give him ninth overall. Meanwhile Fredriksen pushed hard to make it back from 22nd to 15th at the finish. 18th was Hakon’s overall today and he'll be hoping to reground and recover for the next round in Latvia in two weeks time.

It was a great weekend. I was enjoying the whole event, especially after two years of a ‘quiet Arco’, this year was different, it was nice. I got two good starts, riding was good in both races, after half the race I was leading them and controlling them so it was a good feeling. A big thank you to all the fans who travelled here today, they are amazing. I’m feeling really good at the moment, I’m really looking forward to going to Kegums, I really like that track. I’m just going to train hard and be there in two weeks. Can't wait!

Whist perhaps the end results weren’t as good as I hoped, I am still very positive about how things went this weekend. I showed in the qualification race, and in moto one today that I have the speed to run with the guys up the front so now I have to put myself in the position to do that regularly. I also have to extend that speed for the full 35 minutes, but I don’t think I’m too far away from that and I’m excited to get to Latvia after another week of work. Thanks to the team for all their help and for helping me make these steps every race.

After my DNF in the Qualifying Race it was quite a difficult weekend for me because I had a very poor choice on the start-gate. I had better start in the second moto but I didn’t really find a good felling and rhythm today with the track. I guess I lost a little confidence from yesterday’s crashes and didn’t want to make the same mistakes again in today’s races.

I got some important championship points in both motos and I did my best even though it wasn’t the best weekend for me. My thumb was hurting a little bit, but much improved from Portugal.

The new track direction was something new, but I think the track was safer going in the original direction and I prefer it the traditional way.

A proud weekend to be pleased with. Our boys were fast and put the CRF at the front throughout various moments of the event track sessions.

Tim taking maximum points being the notable success, so of course big congrats to him and the team, but looking closer it is visible that Mitch and Rubén have the pace of the front places too. Saturday is not the points day, but still gives indication of our strengths, turning those into Sunday Championship points could have been better in both classes.

Three CRF450Rs inside the overall top 10 is a good score, especially when Rubén is in his rookie year and Mitch coming off a year away from racing due to his injury.

Stephen fought hard for his points in MX2 and Hakon has got to improve his starts to show his speed. He spent all his races passing traffic due to negative starts.

Let’s see again in Latvia in a couple of weeks.