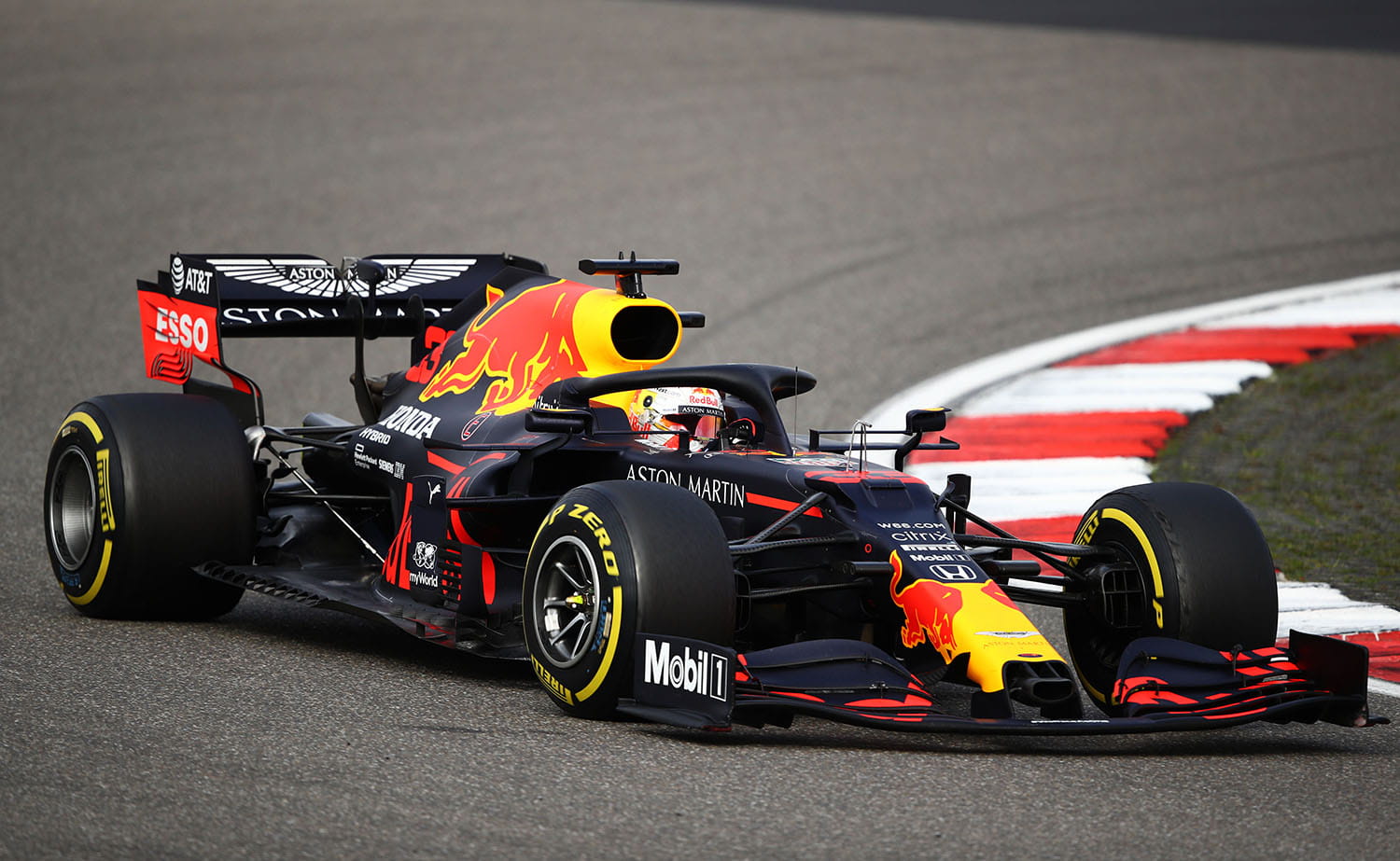 Max Verstappen fought through his very last lap around the Nurburgring to stay in the hunt for second in the Formula 1 World Championship, finishing second in Sunday's Eifel Grand Prix while earning the extra point for the fastest race lap on the last of his 60 trips around the 3.198-mile circuit.

Verstappen had a strong weekend in the Honda-powered Aston Martin Red Bull, qualifying third and running in the top three all day en route to his sixth top-two finish of the year. The Dutchman's performance, coupled with a DNF by Valtteri Bottas, promoted him to within 14 points for the second spot in the championship with six races to go.

The Red Bull driver and eventual racewinner Lewis Hamilton – who equaled Michael Schumacher's all-time record of 91 F1 wins Sunday – ran away from the field and threatened to put everyone else in the race a lap down before Lando Norris' stricken McLaren brought out a safety car with 15 laps to run.

But while the safety car provided a free pit stop for new tires, the cold temperatures (49F) and the five laps it took to clear the Norris car meant that grip would be tough to find on the cold tires. Verstappen was equal to the task in holding off the Renault of Daniel Ricciardo however, and chased Hamilton home to take second place.

Scuderia Alpha Tauri's Pierre Gasly carded his second-best result of 2020 with a sixth-place run, making up six positions after starting 12th. The Frenchman ran 32 laps on his first set of tires to climb to eighth before his first stop, and then made passes of Romain Grosjean and Charles Leclerc after the Lap 50 restart to secure the sixth spot.

The afternoon was far less kind to Red Bull's Alex Albon and AlphaTauri's Daniil Kvyat. Albon, who had started fifth, pitted on Lap 9 after flatspotting a tire on the opening lap. Coming back through the field, Albon had contact with Kvyat during an attempted pass, causing Kvyat to lose his entire front wing. The time lost to repair the car doomed the Russian to a 15th-place finish while Albon hit debris that punctured his radiator and led to his retirement on Lap 25.

The teams and drivers of the Formula 1 World Championship will have a week off before heading to Portugal to run the 2.88-mile Algarve (Portimao) circuit, which will be another venue that has never hosted a Formula 1 event.

Technical Director, Honda F1
“Max produced another excellent second place finish for Aston Martin Red Bull Racing, just as he did two weeks ago in Sochi. He also set the fastest race lap right at the end of the Grand Prix, which is a good sign for the upcoming races. For Scuderia AlphaTauri, Pierre drove a very strong race to go from 12th on the grid to sixth, thanks to several exciting passing moves. His and Max's performances are both very encouraging for the rest of the season. Unfortunately, Daniil and Alex were less successful this afternoon. Kvyat's race was compromised when he lost his front wing after the collision with Albon and later, the team decided to retire Alex, after debris caused a radiator to leak, which led to a PU issue. In two weeks' time, we go to what is another brand new venue for F1 in Portugal, therefore we will be doing a lot of simulation work to prepare for it to the best of our ability. Finally, on behalf of Honda, congratulations to Lewis Hamilton on the great achievement of equaling Michael Schumacher's record of 91 F1 wins."

Aston Martin Red Bull Racing Honda
Start 3rd, Finish: 2nd
“Overall it was a positive weekend and I think we can be very pleased with another second place. I tried to keep as close as possible to Lewis during the race and we just didn't quite have the pace to fight him but overall I was pleased with the performance. We have taken a step forward with the car this weekend, so I am of course happy with that, but we still need to improve and we will keep pushing so we can take the fight to Mercedes every weekend. The Safety Car re-start was not easy with the cold temperatures and the tires, especially with the others behind having a bit of a temperature advantage after catching up to us, but I managed to keep them behind and pull away again with Lewis. I'm of course also happy with the point for the fastest lap which was an extra bonus. It's also good to see Daniel (Ricciardo) back on the podium, he is a great driver and he really deserves it."

Aston Martin Red Bull Racing Honda
Start: 5th, Finish: DNF
“I had a lock-up avoiding contact on the first lap which meant I had to pit really early because I had severe vibrations from a flat spot on the tire. I don't really know what happened with Daniil. I think he may have run a little wide into the chicane when we did the re-start and I guess it was a bit of misjudgment from my side. After that, the Team saw the temperatures rising and I was asked to box and then retire the car. The Team found that some debris had pierced the radiator system which led to the rising temperatures. It is definitely not the way I wanted to end the weekend as the car felt good, but onwards and upwards and I'm looking forward to Portimao."

Scuderia AlphaTauri Honda
Start: 12th, Finish: 6th
"I'm really happy today because yesterday was pretty difficult for us. We know that on Sundays we usually have a bit more pace to fight and be in the mix for points, and today it was good fun. I had a lot of battles on track – attacking, defending…all sorts of situations and I must say I really enjoyed it out there! The team took all the right decisions in the right moments, so I think we can all be very pleased with sixth position today."

Scuderia AlphaTauri Honda
Start: 13th, Finish: 15th
"Not a good one today, my race was pretty much ruined from the moment I had contact with Albon. I don't know what he wanted to do but as a result, I lost my front wing and the car was massively damaged on the floor and brake ducts. I lost so much time doing that slow lap to the pits without a front wing, there wasn't much I could do afterwards. I was just hoping for some rain or something to happen to be able to catch up, but nothing happened. It's a shame because until that incident with Albon it really looked like it could have been a very strong race, I think we could have done well today."