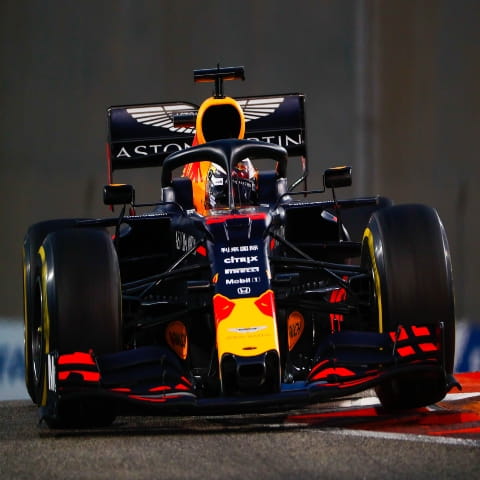 As he has done for much of the year, Red Bull's Max Verstappen led the way in the Honda camp, starting and finishing second, securing the second spot with a strong pass of Charles Leclerc on Lap 32. Verstappen's ninth podium finish of the year cemented a third-place finish in the 2019 Driver Standings, marking the highest finish for a Honda-powered driver since 2004 (Jenson Button, 3rd).

Max Verstappen
Aston Martin Red Bull Racing
Start: 2nd, Finish: 2nd
"Of course I'm very happy to finish the season with a podium and to be third in the championship ahead of both Ferraris is also a good achievement. The pace was good and overall we were quite a bit faster than the other guys which is a nice feeling. Looking back my highlight of the season was Austria. To take the first victory for Honda in the V6 era was very emotional and as a Team to win at our home track again in front of so many Dutch fans was a great feeling. Honda made some great improvements so we can be very happy with our first season together. As a team we want to move forward next year and fight for the title. We need to push to close the gap but looking at the last few races we have made a positive step."

Alex Albon capped a strong rookie campaign in the other Red Bull machine, finishing sixth on the day after a lengthy duel with Sebastian Vettel's Ferrari. Albon parlayed his midseason move from Toro Rosso to the Red Bull seat into eight top-six finishes in his nine starts, propelling the Thai driver into eighth in the final standings.

Alex Albon
Aston Martin Red Bull Racing
Start: 5th, Finish: 6th
"The race didn't turn out quite how we wanted. We pitted early to try and undercut Seb but it didn't work and then we got stuck behind a train of traffic without DRS. That made for a long second stint and Seb cleared a lot of cars quicker than we probably expected. Looking back over the season I can be happy. I know there's some work to do and areas I have to improve. I feel like the racing has been good, the pace still needs work, but that will come with experience. We're testing next week so we'll continue the hard work and come back stronger next year. I'm really enjoying working with the Team so I can't wait for 2020."

Daniil Kvyat and Pierre Gasly, who are confirmed to return as teammates at Toro Rosso in 2020, had drastically different days in Abu Dhabi. Gasly started 11th but found himself on Pit Lane one lap later after getting squeezed into first-turn contact that damaged his front wing. The Frenchman soldiered on to finish 18th and ended up seventh in the driver standings.

Daniil Kvyat
Red Bull Toro Rosso Honda
Start: 13th, Finish: 9th
"Today was a nice way to finish the season. That first stint on the base tire was probably the best stint of my life, I pushed like there was no tomorrow! Every lap I was quicker than the cars around me and I had a great feeling with the car. It worked out exactly as we had planned it, our strategy was fantastic and we had a good setup for the race. Maybe we sacrificed in qualifying a bit yesterday but we managed to put everything together today. I felt I left something on the table in the last couple of races, so I wanted to close the season with a really good race, to finish the year the way I did is a great feeling."

Pierre Gasly
Red Bull Toro Rosso Honda
Start: 11th, Finish: 18th
"I was really looking forward to the battle. As Daniil was able to show, we had the pace and it could have been an exciting end to the season. Unfortunately, my race was over on the first lap when I got hit from behind and pushed into the car in front and my front wing broke. After the pit stop to replace it, I was one lap down and it is frustrating when you're out there without being able to fight anyone, just hoping for a safety car. It's a shame to end the last race of the season like this."

His teammate picked up the mantle for Toro Rosso as Kvyat made his initial set of Pirellis last for 40 laps before he pitted for tires. The work done by the Russian in the first part of the race paid off handsomely in the waning laps as he used his new shoes to get around Nico Hulkenberg and into ninth place, earning his ninth points-paying finish of the year.

The 2019 Formula 1 season was statistically one of the best for Honda in the last two decades. Verstappen, Kvyat and Gasly combined to earn 11 podium finishes, which is the most for Honda-powered cars since 2004 (Button, Takuma Sato).

Toyoharu Tanabe
Technical Director, Honda F1
"Having one driver on the second step of the podium and three cars in the points was a good end to the season. Another strong performance from Max saw him do a good job of managing the tires and he produced a fantastic passing move on Leclerc to take second, and he finished third in the Drivers' championship. Alex had an excellent year as a rookie. As for Scuderia Toro Rosso, Daniil did a good job of tire management, running a brave strategy, being the very last driver to change tires, which put him in the points and then a great move on the Renault gave him a well-deserved ninth place finish. Unfortunately, Pierre's race was really over after his opening lap collision.

This was our first year in the hybrid era working with two teams, with whom we communicated very well, allowing us to make a solid step forward. That progress is reflected in our three wins with Red Bull and two podiums with Toro Rosso. I would like to thank both teams; those members working at the track and everyone back in the facilities in Japan, Italy and the UK, as well as our suppliers. We even had support from other departments within Honda, so the whole company played a part in our improved performance this year. I would also like to thank all the fans who have supported us. This has been an encouraging year, but what we achieved this season is not yet where we want to be, so we will keep pushing to improve."

Verstappen scored three victories, marking the most wins for Honda power since the 1992 season when Ayrton Senna and Gerhard Berger combined for five victories. Verstappen also earned a pair of poles on the year, scoring multiple poles for Honda for the first time since 1991.