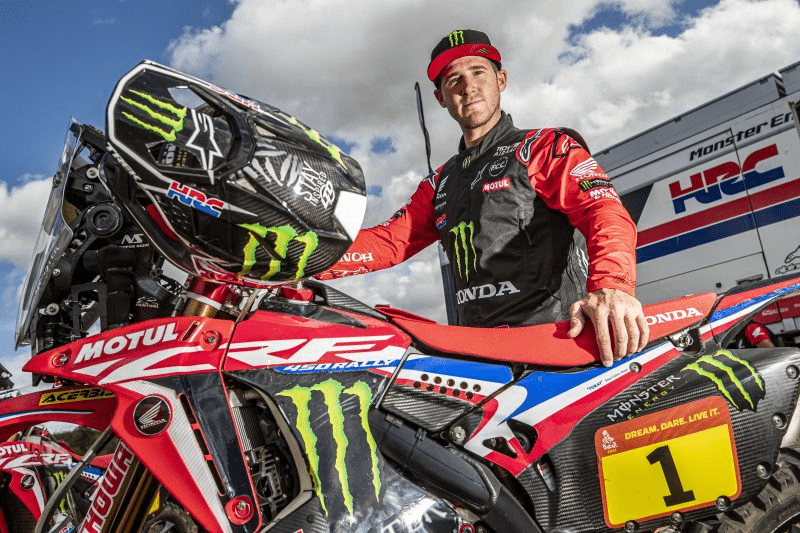 The biggest novelty at the official presentation of the 2021 Monster Energy Honda Team was not so much the riders, but rather, the image of the Honda CRF450 RALLY itself, which is set to tackle the forthcoming Dakar Rally with the number 1 emblazoned on the fairings.

Monster Energy Honda Team, hoping to retain the title claimed by American Ricky Brabec last year, was officially presented today by means of a worldwide event held on Global Honda Racing’s social networks. Ricky Brabec, José Ignacio Cornejo, Kevin Benavides and Joan Barreda will be the four official Monster Energy Honda Team riders to take part. All four finished the last edition of the Dakar, as Brabec made history, not only by clinching the overall victory, but also becoming the first American rider to win the prestigious rally.

Ricky Brabec’s Honda CRF450 RALLY will display the number 1 on its fairing, with the reigning champ lining up alongside three other fine riders. Chilean José Ignacio Cornejo (#4), fourth last year, will be an asset, having shown great ability to adapt to the Saudi Arabian territory. Argentinean rider Kevin Benavides (#47), runner-up in 2018, is another rider likely to aspire to victory. This year he arrives fresh off the back of a win at the Andalucía Rally. Joan Barreda (#88), needs little introduction; by now a fully-fledged Dakar legend with some eleven Dakar participations to boot, and currently the rider holding the highest number of stage wins: 24.