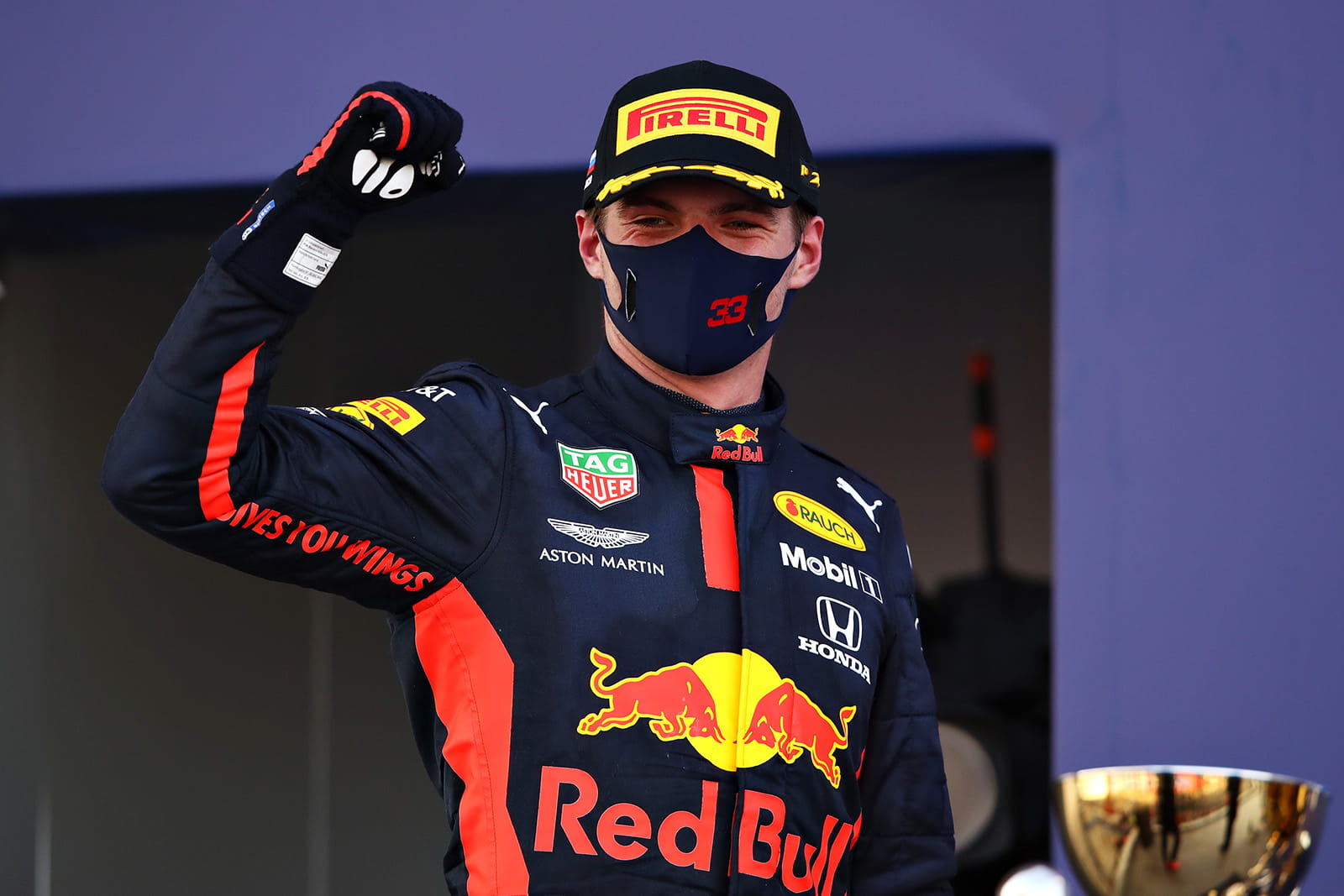 For the first time in 2020, all Honda-powered Formula 1 drivers tallied championship points as drivers from Aston Martin Red Bull and Scuderia AlphaTauri each finished in the top 10 in Sunday's Russian Grand Prix.

Max Verstappen led the way for Honda, running a strong second to Valtteri Bottas in gathering his seventh podium of the season. The AlphaTauri team of Daniil Kvyat and Monza winner Pierre Gasly came home in eighth and ninth respectively, with Kvyat earning his third consecutive points-paying finish, while Alex Albon battled through a trying afternoon to snare the 10th spot and a championship point for Red Bull. The result marked the first time since the 2019 Monaco GP that all four Honda drivers scored championship points in the same race.

Starting from the front row, Verstappen briefly dropped to fourth place while fighting off an early advance from Daniel Ricciardo but recovered third place before the end of the opening lap. He settled in behind the Mercedes duo of Bottas and Lewis Hamilton, and was promoted to second when Hamilton incurred a time penalty for improper practice starts. Verstappen made up ground after switching to the harder compound tires on his lone pit stop and closed to within eight seconds of Bottas at the finish in taking his fourth runner-up result of the year.

Kvyat continued his recent run of solid efforts in the AlphaTauri, moving up after starting 11th to run in top three during the first cycle of pit stops. His forward charge was blunted after his pit stop when he could not find a passing opportunity on the tight Sochi layout after coming out behind Esteban Ocon and settled for eighth. Gasly pitted for tires with 11 laps left and used them to make two passes to secure the ninth spot.

Just one race after becoming the first Asian driver to earn an F1 podium since 2012, Alex Albon had to claw his way from behind to earn a top-10 finishing spot. Starting 15th after a penalty for a gearbox issue, Albon went to a two-stop strategy that forced him to come through the field, passing Lando Norris late in the race to finish 10th.

The teams and drivers of the Formula 1 World Championship will have a week off before heading to Germany for the Eifel Grand Prix, which will run at the 3.191-mile Nurburgring GP circuit, which has not hosted Formula 1 since 2013.

Toyoharu Tanabe
Technical Director, Honda F1
"It was a good day from a Honda point of view, with four cars in the points for the first time since last year's Monaco Grand Prix. That is particularly satisfying after we had experienced some reliability issues in the last couple of races. Max and Aston Martin Red Bull Racing delivered a good performance to split the Mercedes and finish second. After starting 15th due to a gearbox penalty, Alex made his two-stop strategy work to bring him a valuable point for tenth place. Scuderia AlphaTauri had a strong race, with both Daniil and Pierre getting some good overtaking moves on their way to eighth and ninth respectively. We return to Europe and Germany in a fortnight. It will be the first time we have raced at the Nurburgring in this hybrid era, so we will be doing plenty of simulation work in preparation for it."

Max Verstappen
Aston Martin Red Bull Racing Honda
Start 2nd, Finish: 2nd
We can be very happy with second place today, especially on a track where we know that we aren't normally so competitive. It is a good amount of points for the Team and what we needed after the last few races. There was very low grip on the inside of the grid at the start, which cost us a bit and the first few corners were pretty interesting, but we stayed calm and I quickly moved past Daniel (Ricciardo) again. I struggled to follow the Mercedes cars on the medium tire as I had a lot of oversteer but once I pitted on to the hard we were more competitive and I focused on my own race which we managed well. It's good to be back on the podium and we can definitely be pleased to finish within eight seconds of Bottas on this track."

Alex Albon
Aston Martin Red Bull Racing Honda
Start: 15th, Finish: 10th
"Today was a lot of work for one point and it wasn't an easy race. We struggled at the beginning to overtake and get through the pack on the hard tire and so we lost a lot of time. When we swapped to the mediums it was a little better and we did as much as we could but it was difficult out there and a frustrating race. We were just in traffic the whole time without any clean air so we couldn't put down any really good laps. After the gearbox penalty, today was about damage limitation and now I'm already focusing on Germany and having a cleaner weekend in two weeks' time."

Pierre Gasly
Scuderia AlphaTauri Honda
Start: 9th, Finish: 9th
"It wasn't an easy race for us. I had a good start and was running in P7, but then we lost quite a lot of time in the middle part of the race when I was fighting with Alex and Kimi (Raikkonen). We got overcut by Charles (Leclerc), but I was pretty fast and was trying to catch him. If the Virtual Safety Car period had been a bit longer, it would have certainly helped with a free stop, but it was shorter than expected so I paid for it a bit. However, I tried to recover as best as I could and was able to overtake a few cars.  It's a bit disappointing as the car felt great, we had good pace and I think we could have done more today."

Daniil Kvyat
Scuderia AlphaTauri Honda
Start: 11th, Finish: 8th
"I'm really happy with today, my home Grand Prix couldn't have gone much better. It was a tough race, I always had to push to make the strategy work, but this is the kind of racing I like. When I saw Hamilton behind me and I was able to keep him behind for a couple of laps, I thought the pace in the race is amazing. I was confident this morning that we could have had a good race as I'm normally quite strong when it comes to Sundays. It's just a shame I wasn't able to force (Esteban) Ocon into a mistake, otherwise P7 was definitely on the table, we were quicker but it's hard to overtake with these modern F1 cars. I'm happy with my driving and we got some good points for the team. The car is there, the pace is there, so we have to keep pushing for the rest of the season, hopefully we can gain a position in the Championship."