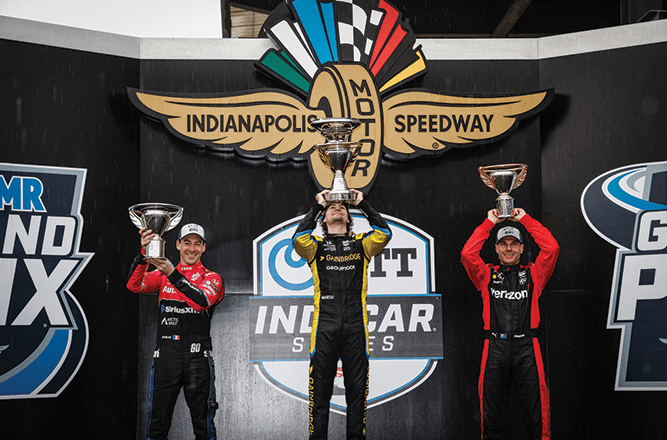 Constantly changing weather conditions – from wet to dry, back to wet again, and finally extremely wet – made for an extremely challenging GMR Grand Prix today on the road course at the Indianapolis Motor Speedway. But at the end of two hours of intense competition, Colton Herta scored his first race win of 2022 and led fellow Honda driver Simon Pagenaud home for a 1-2 finish for the manufacturer.

Herta and his Andretti Autosport team were among the first to change from wet weather “rain” tires to “slick” dry weather tires as the track dried early in the race, and were equally quick to change back to wet weather tires as conditions warranted.  A mistake-free day from both driver and team netted Herta his seventh career INDYCAR victory, and first of the 2022 season.

Behind Herta, Meyer Shank Racing’s Simon Pagenaud completed a 1-2 result for Honda with a charging drive from 20th on the starting grid to second at the checkers.  Equally impressive, Marcus Ericsson recovered from early-race contact – and a resulting long pit stop for repairs – to put on a late-race charge when conditions were at their worst, to finish fourth.

Colton Herta (#26 Andretti Autosport Honda) Finished 1st: “This is awesome! That was the hardest race I think I’ve ever done.  [The early change to dry weather ‘slick’ tires] sure helped us a lot, we gained a lot of positions there.  And the other [strategy] calls came at just the right time, too.  Wet-to-dry; back to wet, incredible.  And thank you to all the fans for sticking around in this kind of weather.  Love you guys.”

Simon Pagenaud (#60 Meyer Shanki Racing Honda) Finished 2nd: “Visibility was a real problem at the end, it was really difficult to drive at the end. It was really unfortunate, as the car was really good to drive, but it was so hard to see. I was looking at the [signaling] lights on the side [of the track] to find my braking points at the end.  It was really tough to even finish the race. Congrats to [winner] Colton [Herta], and it was an amazing job from everyone at Meyer Shank Racing.  We made the right calls on the tires, even though it was tricky, really tricky to decide.  But overall, a great day for us, a really good job.”

Marcus Ericsson (#8 Chip Ganassi Racing Honda) Finished 4th: “It was one of those days, you know? Just a crazy race.  My car was really good in the wet, though.  We made good progress at the beginning, then got spun around and had to replace the rear wing, and still had damage on the rear of the car for the rest of the race. The guys on the team made really good calls on strategy and then when the rain came again at the end, my car was great in the wet.  It gave us another opportunity and I made some good moves. So P4 is a very good result.”

Wayne Gross (Manager, Trackside Support, Honda Performance Development) on today’s GMR Grand Prix: “This was a great result for us.  We've had our chances to win some of these early-season races, but things didn’t go our way.  Today, when conditions were at their most challenging, Colton Herta and Andretti Autosport made all the right moves and scored a most impressive victory.  Simon Pagenaud and the Meyer Shank team again showed their prowess at the Indianapolis Motor Speedway to complete an outstanding 1-2 result for Honda; and Marcus Ericsson’s charge at the end – when conditions were at their worst – was inspiring.  Thanks to everyone at HPD for keeping their heads down and focusing on the job at hand this weekend, and let’s go on to the ‘500’.”

The “Month of May” began this weekend at the Indianapolis Motor Speedway with the GMR Grand Prix.  Held on the IMS infield road course, Saturday’s 85-lap race kicked off three weeks of on-track activities leading up to the 106th running of the Indianapolis 500 on May 29.

Prior to today’s win by Colton Herta, Honda’s most recent victory at the GMR Grand Prix came in 2020, when Scott Dixon and Graham Rahal scored a 1-2 finish for Honda. Honda drivers went on to win the Indianapolis 500 in both 2020 (Takuma Sato, his second ‘500’ victory) and 2021 (Helio Castroneves, for his record-tying fourth win at the Brickyard).

The 14 Indianapolis 500 wins by Honda at the famed Indianapolis Motor Speedway lead all other major automobile manufacturers.

Activities at the Indianapolis Motor Speedway continue this week, but move to the historic 2.5-mile oval with four days of practice, starting Tuesday, followed by qualifying next weekend for the 106th running of the Indianapolis 500 on May 29.